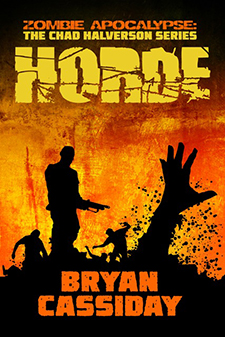 Winner of the 2021 American Fiction Award for Best Horror Novel

Finding plague victims inside their compound, survivors of the zombie apocalypse suspect that the zombie plague has mutated and is being spread by spores emitted by infected flesh-eating ghouls. People infected by the spores could be asymptomatic carriers. Not only do the survivors have to worry about being bitten by rampaging flesh-eating ghouls but also being infected by inhaling spores emitted by a carrier within their camp. Terrified and suspicious of each other, the victims live in mutual fear as they try to determine who the carriers are.

Meanwhile, at the Mount Weather Emergency Operations Center President Cole declares a national emergency under section 201 of the National Emergencies Act and proclaims himself president for life as he hunkers down in the bunker with what little remains of the US government.

Society collapses as the world is devastated by both plague and the nuclear weapons used to kill off the infected flesh-eating creatures that were spawned by the pandemic.

National Clandestine Service black ops agent Chad Halverson is taking refuge in a blast shelter in the Nevada desert after an A-bomb with the flesh eaters' name on it is dropped on Las Vegas at the behest of the president of the United States.

Listen to an excerpt from Poxland: 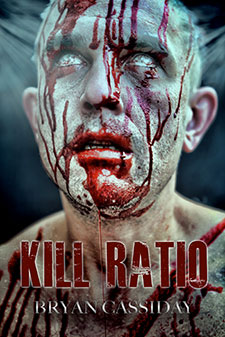 The end of America is near.

A plague that kills its victims and resurrects them as flesh-eating ghouls has decimated the American population, forcing what's left of the government to take shelter underground in the Mount Weather Emergency Operations Center in Virginia. 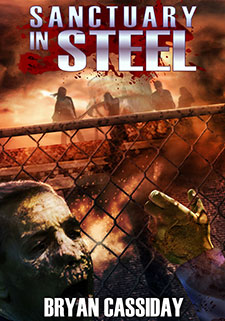 Seeking sanctuary from the walking dead in Alcatraz prison, Halverson discovers that all is not as it seems on the island haven at the Rock.

In fact, he may have more to fear than the walking dead in the person of Alcatraz's reigning "Chosen One," the charismatic proponent of law and order Jefferson Bascomb, who believes zombies have the right to a fair trial. 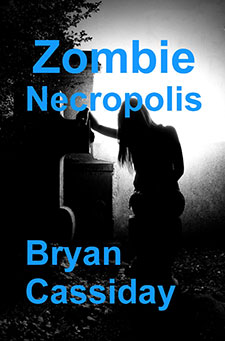 The world has turned.

Plague-infected, flesh-eating zombies now infest the earth. Black ops agent Chad Halverson and a motley band of survivors must do everything they can to survive one more day, even as they try to find out what caused the pandemic.

Fending off zombies at every turn, Halverson and his group make a mad dash through the plague-ravaged, smoldering ruins of Los Angeles and Santa Monica to evade the clutches of the zombie hordes and reach the safety of the sea.

Listen to an excerpt from Zombie Necropolis: 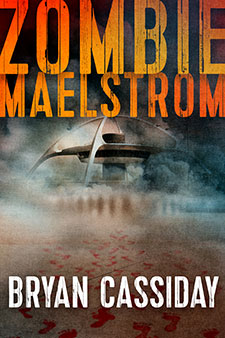 Virulent pockets of plague break out worldwide and spread with mind-boggling speed. Thirty-six-year-old CIA black ops agent Chad Halverson flies to Los Angeles to visit his brother after receiving a call that his brother has been hospitalized after a car accident. Halverson’s Boeing 737 crash-lands in an eerie Los Angeles shrouded with an impenetrable haze of smog, which is harboring something more horrifying than plague. Halverson soon wishes he had never answered that fateful call.

Listen to an excerpt from Zombie Maelstrom: 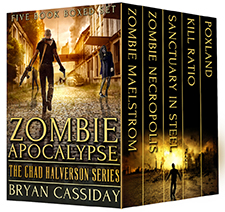 What does the government know? What aren't they telling the people?

Halverson struggles to survive during a zombie apocalypse and find out what precipitated the annihilation of mankind as we know it. Is the government responsible for the plague or is the cause something more sinister? For the first time anywhere, the Zombie Apocalypse omnibus boxed set includes the complete and unabridged editions of the five Chad Halverson books in chronological order: Zombie Maelstrom, Zombie Necropolis, Sanctuary in Steel, Kill Ratio, and Poxland. 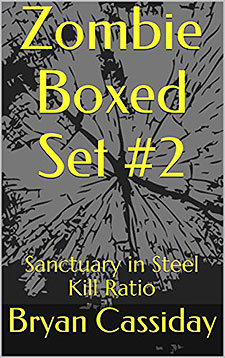 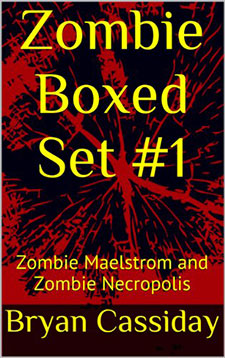 
Bryan Cassiday's complete unabridged editions of Zombie Maelstrom and Zombie Necropolis, books 1 and 2, respectively, in the Chad Halverson zombie apocalypse series are together under one cover. Two complete books at one low price. 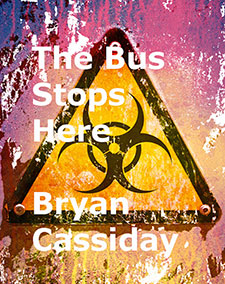 The Bus Stops Here and Other Zombie Tales

All zombies all the time. Included in The Bus Stops Here and Other Zombie Tales are five zombie short stories by Bryan Cassiday, together for the first time in one anthology. "The Bus Stops Here" is a brand-new short story that has never before been published. The zombie action is nonstop and lethal. During a zombie apocalypse, everybody is caught up in a Hobbesian world where life is nasty, brutish, and short. 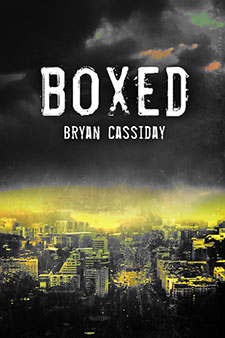 Seven characters find themselves trapped inside an elevator during a zombie apocalypse.